Welcome to COJECO Virtual Archive. Click on the images to view the videos.

JEWS, FREEMASONS, & THE WORLDWIDE CONSPIRACY OF THE ELDERS OF ZION (In Russian)
Dr. Yigal Kotler will try to sort out an entanglement of secrets, rumors, myths, speculations, and historical evidence about the relationship between Jews and the oldest and most mysterious brotherhood of freemasons, about the theories of a worldwide Jewish conspiracy and the protocols of the Elders of Zion, about pseudo-debunkers of non-existent secrets and serious scientists trying to get to the bottom of the truth. 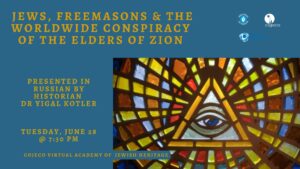 Historian and educator Yigal Kotler will devote this session to the first decade of the history of the Soviet Jews with all its new opportunities and challenges. The participation of Jews in the Cheka-NKVD and their role in the murder of the Tzar’s family, the fight of the Jewish section of the Communist Party against Zionism, Hebrew and Judaism; new Communist Jewish schools, and how authorities tried to turn Jews into collective farmers. We will talk about the role of the Jews in the internal Communist party’s struggle and find out why Trotsky’s brilliant star fell. 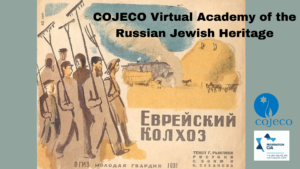 Russian Jews in the Revolution and the Civil War (1917-1920)
Historian and educator Yigal Kotler will discuss myths and reality, passion and blood, terrible pogroms and Jewish chekists, and, most importantly, how life of Russian Jews in just a few years changed direction completely. 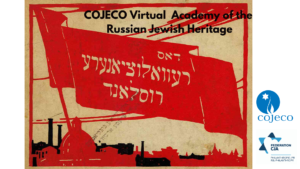 Jews and the Sunset of the Russian Empire (1905-1916)
The session will focus on the history of Jews in Russia in the last decade of the Russian Empire. We will trace the stories of different Jews: victims of the pogroms of 1905, emigrants to America and Palestine, Deputies of the State Duma, Anarchists, Bundists, Zionists, brilliant writers, scientists, lawyers, and adventurers. We will try to find out the origin of the Protocols of the Elders of Zion and learn about the Russian Jews-heroes of World War One. 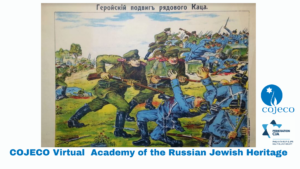 Jews of Russia at the Turn of the 19th Century (1895-1905)
At this session, together with the historian, Yigal Kotler, we will delve into the everyday Jewish life under the last Russian Tzar. We will find out what Jewish writers wrote about, Jewish artists painted, and what Jewish revolutionary terrorists fought for. We will walk through the streets of Kishinev after the pogrom, and talk about little-known facts of Jewish participation in Russian- Japanese war. We will dig into the origins of the “Protocols of the Elders of Zion” and find out why the Russian Zionists were so opposed to the plan of the Jewish settlement of Uganda. 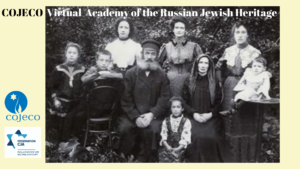 Antisemitism and the Birth of the Jewish National Movement
This session is devoted to to the life of the Jews in Russia at the end of the 19th century, the era of an open anti-Semitic policy, pogroms, the quotas at the universities, the expulsion of Jews from Moscow, and, at the same time, the rise of the Jewish national spirit, the beginning of emigration and the emergence of Zionism. 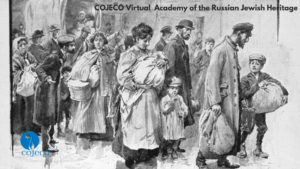 How the Jews discovered Russia. Russian-Jewish history of the second half of the 19th century
This session is devoted to an era of the reign of Alexander the Second. We will discuss how Alexander’s reforms influenced the Jews, what were the first steps of the Jewish Enlightenment (Haskalah), what Jews learned at the Russian universities, whether they were involved in the murder of Alexander, and much more.

Tzar Nicholas the First and the Russian Jews
At this session Yigal Kotler is presenting a dramatic page in the history of the Russian Jews – the reign of Tzar Nicholas I (1825-1855), who was obsessed with the idea of assimilating Jews in his military bureaucratic system of the Russian Empire. How Nicholas fought with the Jewish clothing, forcibly planted State Jewish schools, dreamed of seeing thousands of Jewish soldiers in the Russian army, and how Russian Jews responded to all the new realities?

How Russia Greeted the Jew
At this session, we will get acquainted with the events of the late 18th – early 19th centuries. At that time about two million Polish-Lithuanian Jews fell under the rule of the Russian crown. We will find out how Russia considered what to do with its’ new subjects and how the Jews reacted to it. 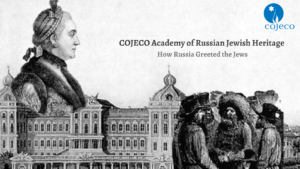 Jews of Ukraine in the 17th-18th centuries
At this session with Yigal Kotler we will talk about the dramatic events of Jewish history in Ukraine during this period. We will touch upon topics such as the pogroms of Bohdan Khmelnytsky and Haidamaks, messianic movements among Jews, the formation of Hasidism, and even try to find the answer to the question whether Jewish Cossacks existed. 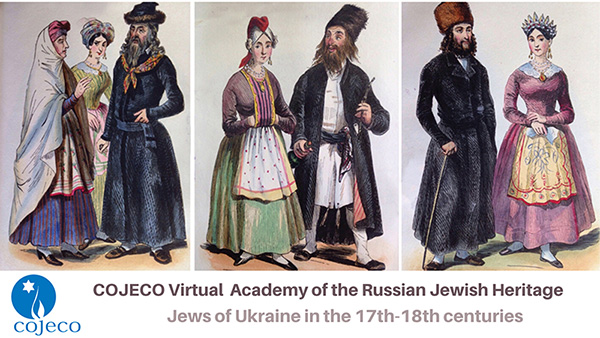 Weekly Torah Portion through the Eyes of a Contemporary RSJ – June 11, 2020
he curious history of the menorah, the mysteries of our greatest Passover holiday and the mystical details of the manna streaming from heaven- all in this weekly Torah portion Behaalotecha. 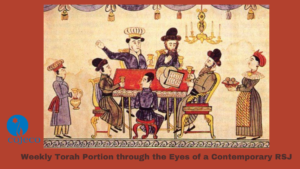 Weekly Torah Portion through the eyes of a Contemporary RSJ – May 21, 2020
Yigal Kotler, Director of Jewish education at COJECO welcomes a guest speaker, Yuri Tabak. Yuri Tabak, has a degree in economic cybernetics, and is a well-known religious scholar, translator, and author of books and articles related to biblical topics and interfaith relations. They will discuss the weekly Torah portion “Bemidbar” from the point of view of the Russian-speaking Jews. The topic of this portion is the first census of the Jewish population – which already sounds suspicious. More than that, a lot of mysterious and unknown is hidden in the texts of this chapter. 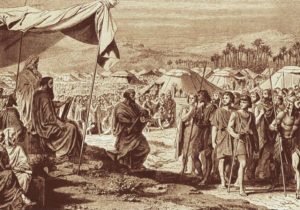 Weekly Torah Portion through the eyes of a Contemporary RSJ – May 14, 2020
Yigal Kotler, Director of Jewish education at COJECO welcomes a guest speaker, Yuri Tabak. Yuri Tabak, has a degree in economic cybernetics, and is a well-known religious scholar, translator, and author of books and articles related to biblical topics and interfaith relations. In this live dialogue, Yigal and Yuri will take a fresh look at the weekly Torah portion, discussing its relevance for the Russian-speaking Jews today. 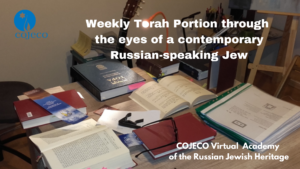 Torah through the eyes of a contemporary Russian-speaking Jew – April 23, 2020
Yigal Kotler, Director of Jewish education at COJECO welcomes a guest speaker, Yuri Tabak. Yuri Tabak, has a degree in economic cybernetics, and is a well-known religious scholar, translator, and author of books and articles related to biblical topics and interfaith relations. In this live dialogue, Yigal and Yuri will take a fresh look at the classical Jewish text as a source, discussing its relevance for the Russian-speaking Jews, reflecting on it as a model for modern day behavior.

From Israel to Ethiopia with Einat Klein
How did the Jews end up in Ethiopia, what was their significance in the royal court, what role did Judith the warrior play, where are the Tablets of the Covenant, and much more. Tour will is led by Einat Klein, a famous Israeli journalist, photographer and guide of ethno- and photo-tours in the Middle East, Asia and Africa. 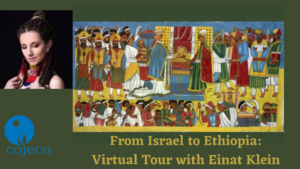 Mrs Maisel and Other Residents of the Upper West Side
Want to figure out where a respectable romantic comedy hero (or heroine) should reside, buy groceries, meet their friends and run off to in search of adventures?  Take a marvelous multi-media virtual tour with us. Gregory Kegeles will talk about the principles of geography in romantic comedy “The Marvelous Mrs Maisel”. 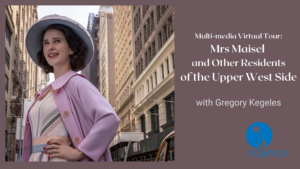 Jerusalem – Going Beyond the Walls
Shavuot is one of the “Shlosh-ha-Regalim” – the three main Festivals when the pilgrimage to Jerusalem took place. To celebrate Shavuot, COJECO is happy to invite you to a virtual tour of Jerusalem, but the one that is less known – Jerusalem outside the walls of the Old City. We’re calling it: “Jerusalem – Going Beyond the Walls”. The tour is conducted in Russian by Boris Krizhopolsky. Boris is a professional tour guide in Israel. He is also the author of the “Sun, Shadow, Dust”. 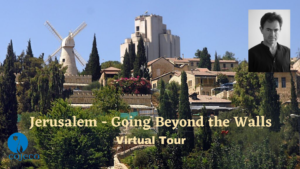 Odessa Jewish Museum Virtual Tour
COJECO Virtual Academy of the Russian Jewish Heritage and Odessa Jewish Community Center “Migdal” invite you and your family to the virtual tour of Odessa Jewish Museum! Museum’s Executive Director, a well-known historian and tour guide Vladimir Chaplin will guide us through the actual museum. Together we will explore exhibition rooms, experience a journey through the history of Odessa’s Jews, become familiar with unique artifacts. 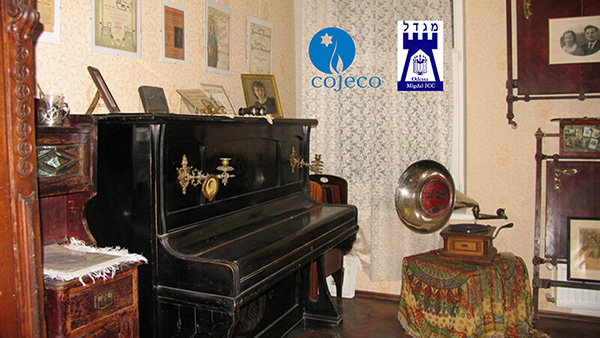 COJECO Pesach Journey to the Met
COJECO RJKrug: Russian Jewish Heritage Program for Families announces its open session. Join us for a virtual tour in the world-class Egyptian galleries at the Metropolitan Museum of Art. Journey back in time to Ancient Egypt, and explore the Exodus story through the eyes of the Egyptian society and Mythology. The program aims to engage adults and teens (12+) in this fully interactive tour with our guide, a Jewish educator and a historian, director of the Torah Intermedia, as well as COJECO RJKrug faculty member – Nachliel haCohen Selavan. 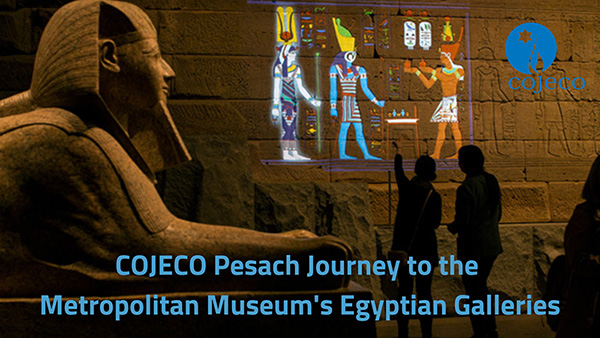